EOD operators conduct some of the military’s most dangerous jobs defuzing and neutralizing bombs. The importance of their work reached a peak during the height of the Iraq and Afghanistan wars when military service members faced widespread threats from the easily manufactured but deadly improvised explosive devices.

However, their mission will only grow as the United States faces an array of threats from countries and non-state actors around the globe, said Army Lt. Gen. Reynold Hoover, deputy commander of U.S. Northern Command.

“The strategic environment we find ourselves in today is evolving from what it had been over the past few decades,” he said. “While counterinsurgency operations are important in some of our areas of responsibility, we can’t afford to solely focus on that. We can’t afford to make the assumption that we will always be fighting insurgents with inferior technology and equipment.”

Government and industry will need to develop innovative technologies that can provide U.S. forces with the capability to act decisively when faced with a variety of hazards, from IEDs to biological agents to improvised nuclear devices, Hoover said.

But the military can’t stop there, he added. It must also work to open the explosive ordnance disposal-mission aperture to include other areas such as ballistic missile defense, he said.

It “may sound odd when I say EOD is involved in a mission that focuses on intercepting and destroying missiles aimed at our homeland, but if we were to be attacked, the EOD community would play a key role,” he said. “What goes up must come down, and if North Korea launches a missile against the homeland, when we intercept it, the pieces and parts are going to fall down somewhere — potentially on U.S. soil.”

Explosive ordnance disposal operators will need to evaluate whether those materials are hazardous, he said. There could be explosives, a potential nuclear, chemical or biological payload, or even unexploded rocket fuel, he said.

“Ballistic missile defense may not be the bread-and-butter mission set of EOD, but we have to stay proficient in it,” he said.

The proliferation of inexpensive unmanned aerial vehicles is another new mission set for EOD operators, he noted. Drones knocked out of the sky by kinetic or non-kinetic measures could still be hazardous. 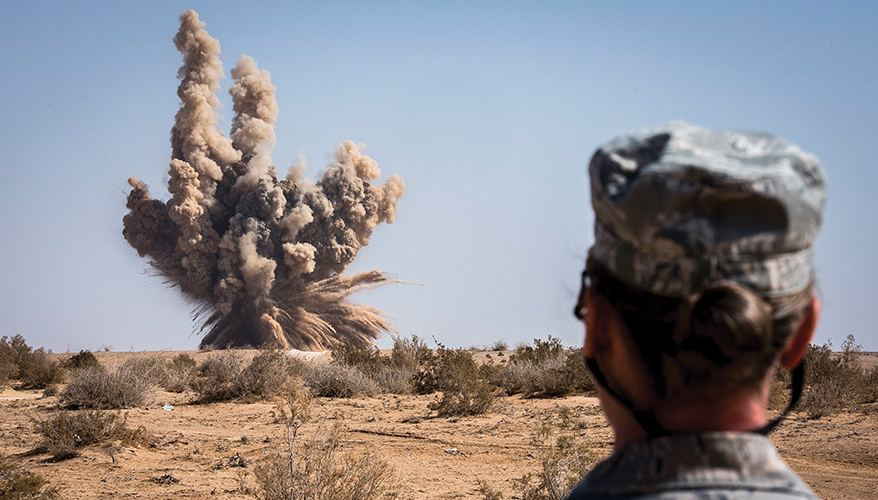