August 2019 – Thousands of residents in Frankfurt have been evacuated on Sunday to allow German explosives experts to defuse a 500-kilo unexploded World War II bomb found close to the European Central Bank headquarters.

The ECB building has been evacuated along with residential areas that are home to some 16,000 people within a roughly one-kilometre radius of the 500-kilogramme bomb.

A bank spokeswoman said that “we have made arrangements for our employees to be able to work from other locations if necessary,” reported the Frankfurter Allgemeine Zeitung (FAZ) daily.

The US fragmentation bomb with two detonators was found on June 25 during construction work in the centre of Germany’s banking capital Frankfurt.

The ordnance clearance service determined that it spelled no immediate danger and scheduled the defusal operation for Sunday.

The evacuation zone stretches across both banks of the Main River and will force the suspension of several train services.

No-one will be allowed inside the area until the end of the operation, tentatively scheduled for 1600 GMT.

Authorities want to avoid delays that marred an even bigger evacuation in September 2017 when 60,000 people had to leave their homes, hotel rooms and hospital wards following the discovery of a monster bomb filled with 1.4 tonnes of explosives.

This time around, all those affected will be given free entry for the day to the city’s museums — a courtesy also to be extended to the emergency personnel who will receive vouchers to visit on other days.

Nearly 75 years after the end of the Second World War, Germany is still littered with bombs and other unexploded ordnance.

Experts say at least 10 percent of the millions of bombs dropped on Germany during the conflict did not explode.

A week ago a buried bomb exploded in a field in western Germany, leaving a huge crater but causing no injuries.

And earlier this month, a 100 kg US bomb was defused near central Berlin’s Alexanderplatz after the evacuation of around 3,000 people.

Around 2,000 dud bombs are believed to remain buried in Frankfurt which was heavily bombed by American and British forces in the last years of the war. 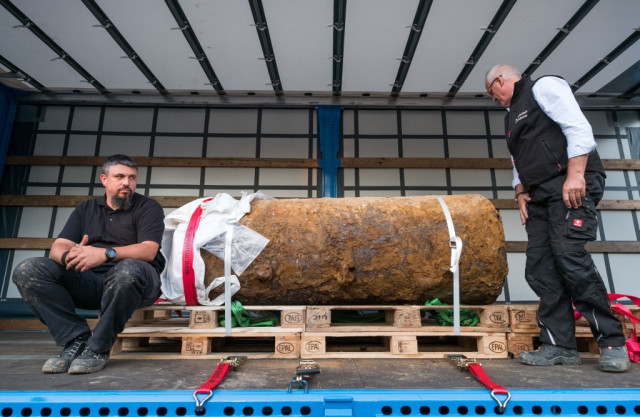